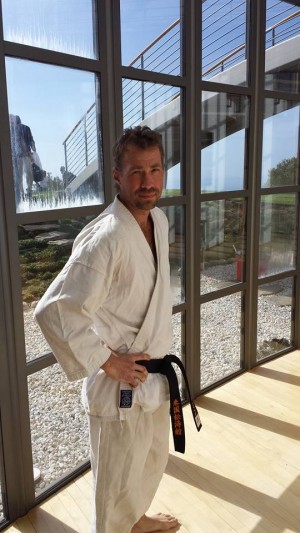 Ben began training with Shotokan Karate of America in 1986 through the University of Chico. He was promoted by Ohshima Sensei and received his Shodan first degree black belt in 1993 and his Nidan  second degree in 1994.  Ben is currently a Yodan (4th Degree black belt) black belt and head instructor of the Chico Shotokan dojo.  He managing his own automotive repair shop, where dojo the dojo has currently been relocated to.  Ben also enjoys family outings with his family such as Boy Scout trips, farmers markets, equestrian competitions, 4h fairs, and any local events.

Ryan, just before grading to Shodan

Starting in 2011 as Ryan began his introduction to the martial arts.  His level head and dedicated approach to practice was rewarded with Shodan (first degree black belt) rank in 2015 at the SKA West Coast Summer Special Training.  Ryan has been leading practices, including kyu (rank before black belt) since 2014.